skip to main | skip to sidebar

Random Acts of Kindness Week 2016 is Feb. 14-20.
We will be doing some Kindness Projects. Please keep a look out of notes being sent home.

This week is Nursery Rhyme week.  In addition to focusing on the rhyming words we wanted to had fun with the  stories behind the rhymes.  I love doing cooking and science type activities so Humpty Dumpty gave us a great opportunity.  Many of the children knew that Humpty is an egg.  What they hadn't thought about before is whether they could put an egg shell back together once it is cracked.  We decided to see if it was possible.

We started with hard boiled eggs.

A cardboard brick/block was our wall. 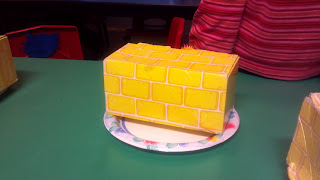 They got to make their Humpty Dumpty fall as many times as necessary to crack the shell. 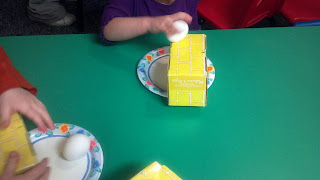 Then they worked diligently to peel the little pieces off. ( We had already tried putting a shell back together during circle time with the egg I showed them). 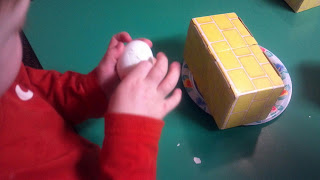 Some children ate the white part, some tried the yoke, some just peeled the egg, some ate the whole thing.

They are already asking when we can do it again!
Posted by ll at 6:27 PM

Hi! I'm Linda. I own and operate a Preschool and After School Program in central Nebraska. We are a small facility located in a residential area of town.
Our tag line :Preparing Today's Child For Tomorrow is based on our mission:
To provide a developmentally appropriate learning environment focusing on Kindergarten readiness, creative art, Christian Values and Hands on learning.
In addition to preschool classes we offer extended care (daycare) services before and after preschool classes and to school age children when they are not in school.

We have been open for almost 7 years. We have seen a lot of changes in the face of education and the needs of families in our area. We strive to provide quality education and care to our families.
We hope to share with your our successes and challenges so we may all benefit from each others insights.